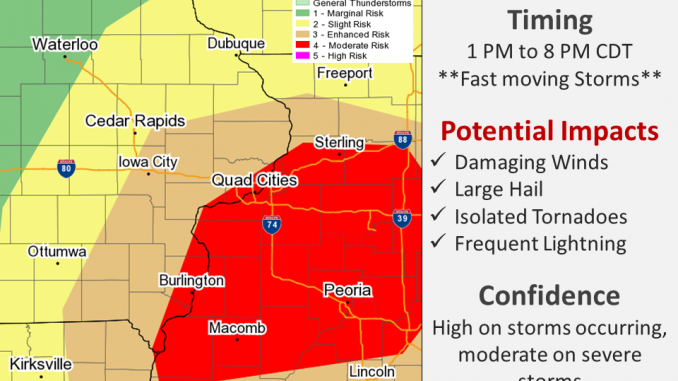 It’s going to be a stormy start to the weekend, with the potential of severe weather in the region on Saturday, followed by windy conditions into Sunday.

Strong thunderstorms will be possible Saturday morning and an isolated severe storm is possible, according to the Quad Cities National Weather Service office.

The highest threat of damaging winds, large hail, isolated tornadoes and frequent lightning with the storms is in Illinois, with an enhanced risk for eastern Iowa.

Forecasters advised that the storms on Saturday will be fast moving so there will be less time than normal to react to approaching storms, which are expected between 1 and 8 p.m.

As the storm system leaves the Midwest, expect sustained west-to-southwest winds of 25 to 40 mph, with gusts of up to 50 mph Saturday night through midday Sunday.

More spring-like conditions are expected to follow to start the first week of April.

National Weather Service forecast for Muscatine, as of Friday 6 a.m.:

Today
Showers likely, with thunderstorms also possible after 4pm. Cloudy, with a high near 54. East wind around 10 mph. Chance of precipitation is 60%. New rainfall amounts between a tenth and quarter of an inch, except higher amounts possible in thunderstorms.