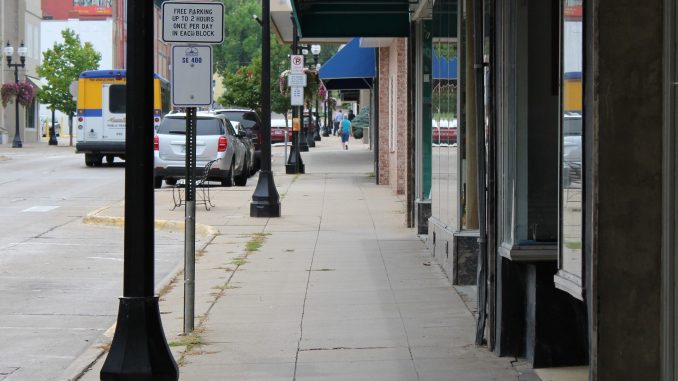 The 2nd Street Streetscape project is an effort to upgrade Muscatine’s downtown infrastructure.

Two spring snowfalls have not halted work on construction projects in Muscatine. Taking advantage of reduced traffic and business restrictions due to local, state, and federal COVID-19 guidelines, contractors are picking up the pace especially in Downtown Muscatine.

Work on the 2nd Street Streetscape Project began on Monday (April 13) in the block from Cedar to Walnut streets. This block has the most work to be accomplished during the two-year project and includes replacement of a collapsing sanitary sewer line, curb-to-curb pavement restoration, and replacement of sidewalks on both sides of the block.

The extent of the work necessitated the full closure of the 300 block of East 2nd Street, but this is the only one of the six stages that will see a full closure during construction. Each block of the project is assigned a stage and each side designated either “A” or “B” with work on one side of a block completed before the opposing side is started. The current work is being conducted in Stage 5.

Work is expected to be completed by the end of May.
The next stage to be worked on will either be Stage 6 (Walnut to Mulberry) or Stage 4.

Underground work on the Mulberry Avenue-2nd Street Roundabout Project has been completed with the contractor working on grading the new intersection before the area is proof rolled and rock added. Pavement restoration is tentatively scheduled to begin in later this month with the project wrapping up by the end of May, depending on the weather.

The 2020 projects will be sent out for bid later this spring. The Full Depth Patch project will be smaller than this past year as the city will focus on hot mix asphalt overlays of a number of street sections and alleys in 2020.

West Side Trail
Heuer Construction has completed the West Side Trail project concrete work from Hershey to Crossroads, Inc., with only a section running through the Arbor Commons development yet to be competed. The contractor is currently focusing on backfilling, hydro seeding, and finishing landscaping along the completed trail from Hershey to Crossroads, Inc.

The trail through the Arbor Commons subdivision will be completed once pavement work in that development has been completed.

West Hill Sewer Separation Phase 4C
Phase 4C of the West Hill Sanitary and Storm Sewer Separation Project (WHSSSSP) began March 16 with underground work for the first stage (Iowa Avenue from 8th to 9th Street and 9th Street from Iowa Avenue to Chestnut Street) completed. Several individual resident water services were to be connected in the next week before pavement restoration begins. Once this work is done, the contract will move to the second stage starting at Linn and 8th Street and working toward Broadway.

Park Avenue Three Lane Conversion Project
The Park Avenue Four-to-Three Lane Conversion Project is scheduled for the 2020 construction year with a public hearing scheduled May 7 Muscatine City Council meeting. The project will convert Park Avenue from four-lanes to three (two traffic lanes with a center turn lane) from Harrison Street to the Mad Creek bridge. A June 16, 2020, bid letting is planned by the State of Iowa. No detours are planned during the work but there will be lane restrictions.

Spring flooding
The Mississippi River crested at 18.93 feet on April 11 and is expected to continue a steady fall over the next several weeks and receding below flood stage (16-feet) by April 24. The river is currently at 18.1 feet and has been above flood stage since March 24.