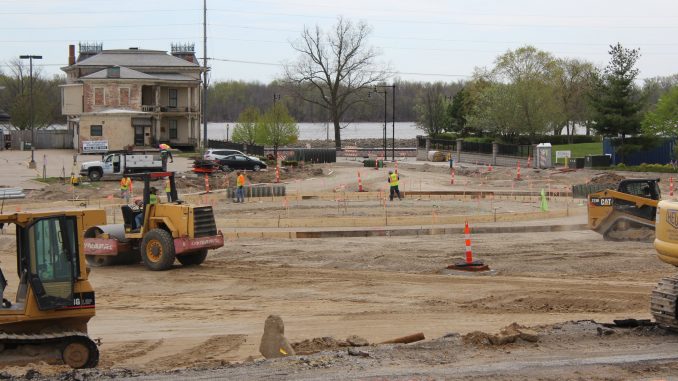 Concrete will be pouring on two fronts next week as work progresses on the 2nd Street and Mulberry Roundabout Project and the West Hill Sewer Separation Phase 4C Project.

Heuer Construction has been forming up the center circle of the roundabout this past week and expects to begin pouring that inner circle Monday morning, weather permitting. A few blocks away, KE Flatwork, Inc., poured curb and gutter along Iowa Avenue and 9tth Street Friday and is expecting to start repaving the street sections on Monday.

The month of May will see a lot of paving completed for the 2nd Street and Mulberry Roundabout with the project still ahead of schedule and expected to be completed by the end of the month. Concrete pouring begins with the inner circle and will continue with the south leg of Mulberry (inner circle towards Mississippi Drive).

West Hill Sewer Separation Phase 4C
Pavement restoration has begun in the first stage of West Hill Sanitary and Storm Sewer Separation Project (WHSSSSP) Phase 4C with KE Flatwork, Inc., pouring curb and gutter along Iowa Avenue from 8th to 9th streets and along 9th Street from Iowa to Chestnut. Repaving of the inner section of the streets is expected to begin on Monday, weather permitting.

The contractor anticipates that work on sidewalks will begin on Monday, May 11, with the two streets reopened to traffic by the end of the month, weather permitting.

May 11 will also see Phase 4C moving to stage 2 with the milling of Linn Street from 7th to 8th streets, and milling of 8th Street from Linn to Broadway. The start of the milling activity will mean the closure of both streets until the stage is completed.

West Side Trail
Heuer Construction has completed concrete work for the West Side Trail project from Hershey Avenue to Crossroads, Inc., with only a section running through the Arbor Commons
development yet to be competed. The contractor is currently focusing on backfilling, hydro seeding, and finishing landscaping along the completed trail from Hershey to Crossroads, Inc.
The trail through the Arbor Commons subdivision will be completed once pavement work in that development has been completed.

2nd Street Streetscape Project
The sanitary sewer has been replaced on 2nd Street from Cedar to Walnut, which was one of the primary focuses of this stage of the 2nd Street Streetscape Project. Contractor KE Flatwork, Inc., is now working on repairing sections of the storm sewer in the Cedar and Walnut intersections before completing sanitary sewer work on Cedar from 2nd Street to the #2 Alley.
Once the underground work has been completed the contractor will remove the old pavement and begin work on the subgrade. The schedule calls for the street to be repaved before work on the south side sidewalk and the north side sidewalk, which is expected to be completed once the street is reopened with restricted lane usage.

The extent of the work in this stage of the project necessitated the full closure of the 300 block of East 2nd Street, but this is the only one of the six stages that will see a full closure during construction. Each block of the project is assigned a stage and each side designated either “A” or “B” with work on one side of a block completed before the opposing side is started. The current work is being conducted in Stage 5.

The next stage to be worked on will either be Stage 6 (Walnut to Mulberry) or Stage 4.

Alley Asphalt Overlay Project
alley’s on Thursday, April 30. The alley’s will be cleaned and overlaid with hot mix asphalt by
The City awarded the contract to Taylor Ridge Paving and Construction at the October 3, 2019, City Council meeting. A total of 11 alleys were on the original 2019 list but were pared back when the projected was rebid last Fall.

The alleys’ to receive the asphalt overlay are: alley behind 400 block Busch Street; alley between Grover & Charles from New Hampshire to Hershey; alley between Oregon & Illinois on the progress of the Mulberry and 2nd Street roundabout. There is some sewer replacement work and pavement replacement in Stage 6.