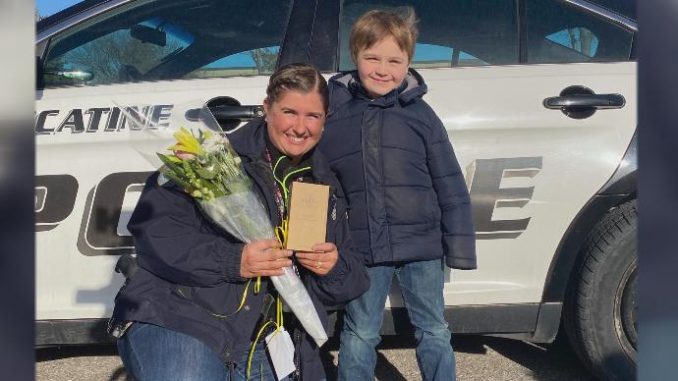 On last night’s virtual Muscatine City Council meeting, two officers were celebrated as Mayor Diana Broderson presented the Life Saving Award to Officer Whitni Pena and the Medal of Valor to Officer Jolisa Colman. Mayor Broderson apologized for having to present these awards via GoToMeeting but that an official ceremony will take place at a later date.
Officer Whitni Pena received her award for saving a child from drowning at a birthday party. Officer Pena performed CPR on the child for approximately four minutes until the child became conscious and spitting up water. Officer Pena was off duty when the incident occurred but used her first responder skills to save 7 year old Kaysen Simonson’s life back in February.
Officer Jolisa Colman received the Medal of Valor after saving the life of someone trying to jump off a local bridge. Back in February, Officer Colman happened to be patrolling an area where she saw someone sitting on the side of a bridge. When confronted, the person said they were going to jump. Officer Colman reached out and grabbed the person before they fell into the river. By putting herself in danger, she was able to ensure the citizen was brought back to safety.