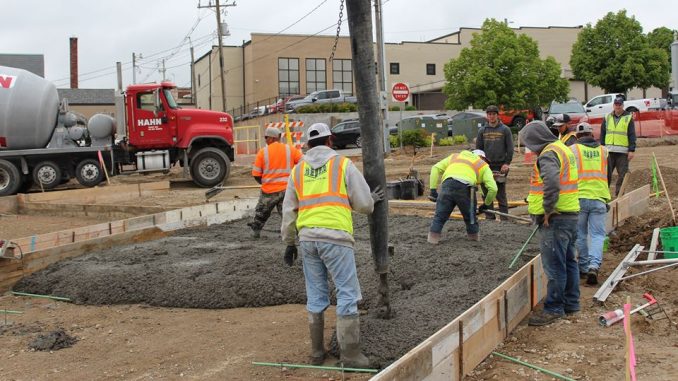 Three major construction projects are on schedule or slightly ahead of schedule as Muscatine enters the unofficial start of summer.

The East 2nd Street and Mulberry Avenue Roundabout is taking shape with the possibility of at least three legs being opened to traffic within the next two weeks. Progress has also been seen on the 2nd Street Streetscape Project with curb and gutter poured in the 300 block of East 2nd Street and the driving lanes expected to be poured this coming week.

Both the roundabout and the first stage of the 2nd Street Streetscape project is expected to be completed by the end of June, weather permitting, and portions of both projects may be opened to traffic within the next two weeks.

The first stage of Phase 4C of the West Hill Sewer Separation Project is also nearing completion with Iowa Avenue and 9th Street expected to reopen as soon as backfilling and seeding is accomplished.

Paving of the 2nd Street and Mulberry Avenue Roundabout continued this past week with the project remaining ahead of schedule as he project heads into the final month of the contract. Heuer Construction, Inc., the prime contractor, expects to complete the project on or before the end of June.

Two of the four legs (south and east) of the roundabout plus the inner circle have been completed with the contractor currently working on the other two legs (west on 2nd and north on Mulberry). In fact, the contractor believes that, weather permitting, the east, south, and west legs of the roundabout can be opened to traffic sometime in the next two weeks.

There is still plenty of work to do before that could happen, however, including the placing of brick pavers to identify pedestrian crossings (the same design that was used for Mississippi Drive), some additional small pours of concrete, the pouring of red concrete inside the inner circle, and backfilling behind the curbs.

The $2.1 million contract was awarded to Heuer Construction, Inc., in August 2019. 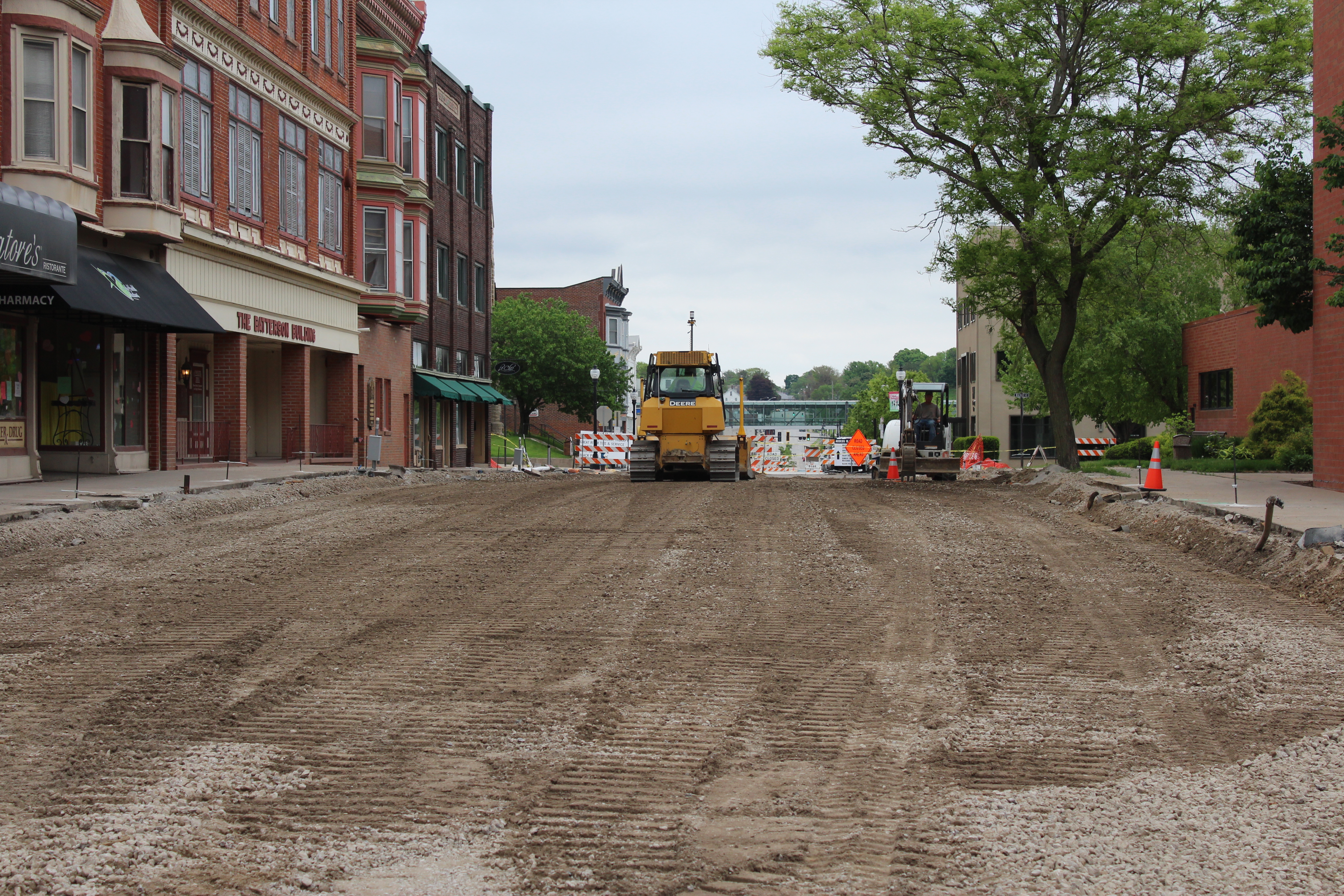 Pavement replacement has begun in the 300 block of East 2nd Street, signaling a major step forward toward completion for the first stage of the six-stage 2nd Street Streetscape project. The pouring of the curb and gutter on Friday completed a busy week that saw the completion of underground work and sub-base preparation. Pouring of the driving lanes is expected to occur next Thursday or Friday.

This stage of the project is expected to be completed by the first week of July when work on the second stage, the 200 block of East 2nd Street (Sycamore to Cedar), begins.

The extent of the work in this stage of the project necessitated the full closure of the 300 block of East 2nd Street, but this is the only one of the six stages that will see a full closure during construction. Each block of the project is assigned a stage and each side designated either “A” or “B” with work on one side of a block completed before the opposing side is started. The current work is being conducted in Stage 5.

Residents or business owners who have questions about the project, the schedule of work, or would just like more information about the project can contact Bill Haag, Construction Project Manager, at (563) 299-0690. 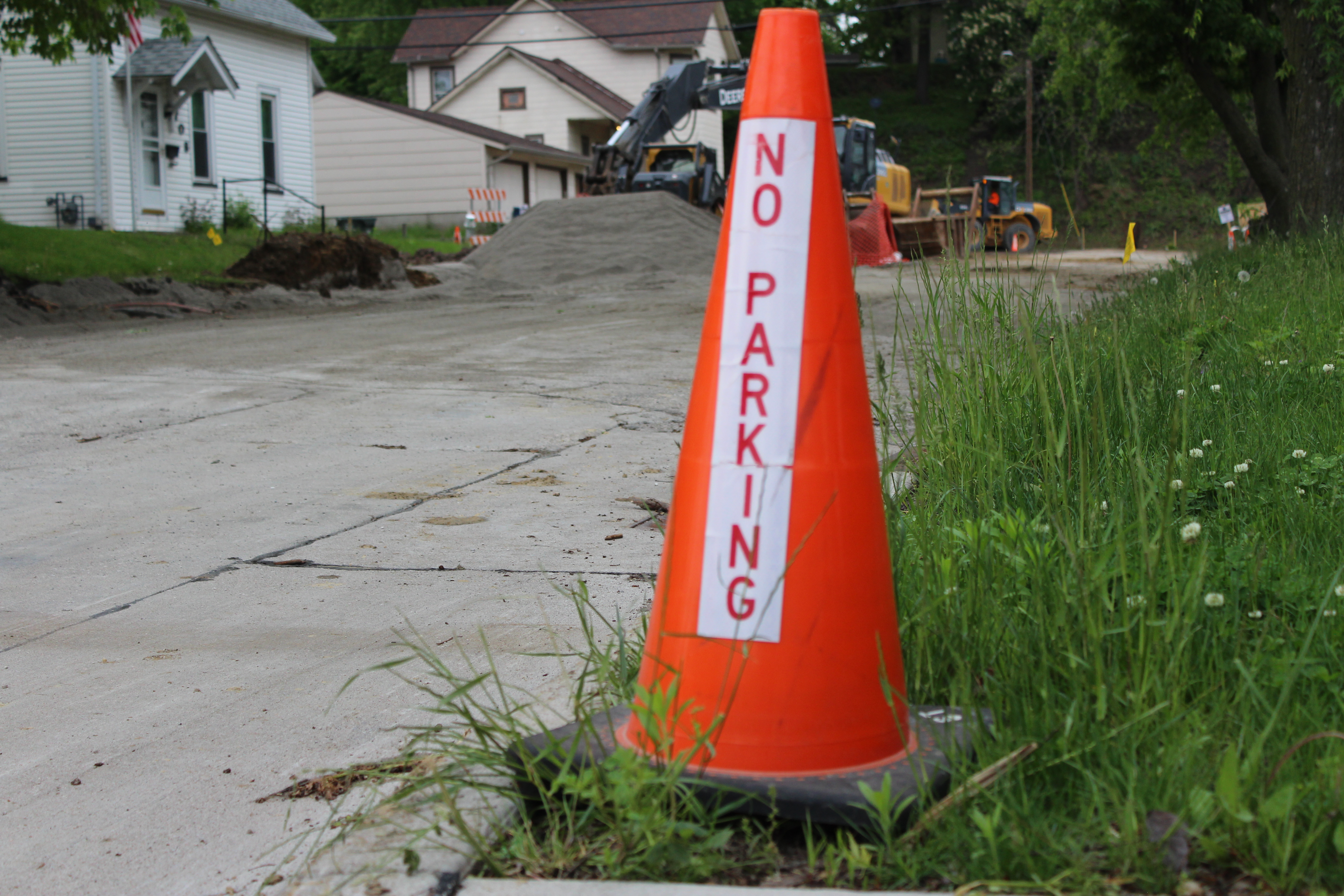 Pavement restoration has been completed in the first stage of West Hill Sanitary and Storm Sewer Separation Project (WHSSSSP) Phase 4C with KE Flatwork, Inc., completing pavement restoration of 9th Street from Iowa Avenue to Chestnut Street, and Iowa Avenue from 9th Street to 8th Street. The contractor is currently completing backfilling and landscaping before the stage is reopened to traffic.

The contractor for the West Hill Sewer Separation project will be closing portions of East and West 8th Street from Cedar to Linn over the course of the next several weeks as punch list items for Phase 4B are completed including reseeding of some lawn areas and work in the streets that may require temporary lane closures.

Drivers are urged to use caution when proceeding in or around construction areas and to find alternate routes of travel when possible.

The trail section on Houser Street is expected to be opened as soon as landscaping is completed. The section through the Arbor Commons subdivision will be finished once pavement work in that development has been completed.