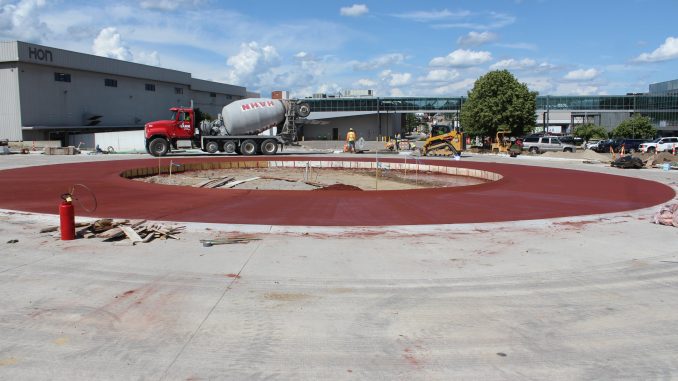 The 300 block of East 2nd Street has new sidewalk on the north side while the Downtown area’s second major project, the 2nd Street and Mulberry Avenue Roundabout, also continues to make progress heading into the final days of June.

The inner circle of the 2nd Street and Mulberry Avenue Roundabout continued to take shape this past week with the addition of red concrete inside the inner circle driving lane. Heuer Construction, Inc., the prime contractor, is continuing work on the medians, sidewalks, and driveways. Handscape Solutions, Inc., is expected to begin brickwork for the crosswalks and sidewalk areas next week, weather permitting.

Work in the East 3rd Street and Mulberry Avenue intersection has also been mostly completed with the intersection reopened to traffic. Some lane restrictions may occur as the contractor complete sidewalk work in that area.

The contractor is anticipating wrapping up work on the roundabout by July 11 depending on the weather and other unforeseen circumstances.

The $2.1 million contract was awarded to Heuer Construction, Inc., in August 2019.

KE Flatworks, Inc., continues in the 300 block of East 2nd Street with the north side sidewalk nearly complete and removal of the south side sidewalk beginning. Brickwork by Eastern Iowa Landscaping in the north sidewalk area and in the crosswalk of the intersection with Cedar Street has also begun. The current schedule has the 300 block and the Cedar Street intersection open to traffic by July 11. However, the half block of Cedar from 2nd Street to the #2 alley will remain closed through at least July 22, weather permitting, as the contractor finishes that section of the Streetscape Project Phase I.

Work will then move to Phase 4A and 4B of the Streetscape Project, the 200 block of East 2nd Street (Sycamore to Cedar), with that work tentatively scheduled to begin on July 23 and wrap up on September 28, weather permitting.

These are the only two phases that will be completed during the 2020 construction. The 2021 construction season will begin with Phase 3A and 3B (2nd Street between Sycamore and Iowa) with a tentative start date of March 15, 2021.

Each block of the project is assigned a stage and each side designated either “A” or “B” with work on one side of a block completed before the opposing side is started.

Residents or business owners who have questions about the project, the schedule of work, or would just like more information about the project can contact Bill Haag, Construction Project Manager, at (563) 299-0690.

KE Flatwork, Inc., has completed installation of the sanitary sewer on Linn Street and from Linn up to the Broadway intersection on 8th Street as work continues on the West Hill Sanitary and Storm Sewer Separation Project (WHSSSSP) Phase 4C. The contractor is now installing the water main from Linn to Broadway and that will be followed by the installation of the storm sewer.

Drivers are urged to use caution when proceeding in or around construction areas and to find alternate routes of travel when possible.

The section through the Arbor Commons subdivision will be finished once pavement work in that development has been complete.