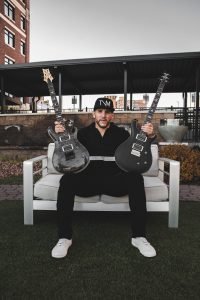 Cameron Smith always knew he wanted to play guitar and be in his own rock band. Smith, who is a devoted fan and player of Paul Reed Smith guitars, was selected as one of their 2021 Pulse Artists, an honor given to only a select few players. “I’ve been a player of Paul Reed Smith Guitars since I was ten years old. I’ve always wanted to have that relationship with a a guitar company. And it just so happened that the guitar company in my mind is working with us.”  He continued by saying “Paul Reed Smith is number one, always has been.”

The Pulse Artist designation honors guitarists in up and coming bands who have positively impacted their local music scene. The bands strong social media presence was also a key factor in Smith being rewarded.

Smith started the band in 2019 with several friends and at the time thought it would be more of a hobby but as the band continues to have success, they’ve decided they’re in it for the long haul. “With the amount of support and small spurts of success the band has experienced in our short time career, we as a band have made a pact to take this band to new heights with everything we do. We aspire for our music and message to reach the masses and make this our full time careers.

You can hear their latest song “Mankind several times a day on 93.1 the Buzz.