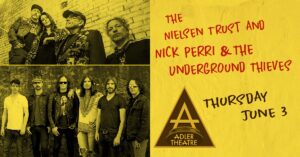 The Nielsen Trust is a new band featuring Rick Nielsen from Cheap Trick and his family.  The legendary guitar player from Rock n Roll Hall of Famer’s Cheap Trick is joined by his son Daxx  who also plays drums for Cheap Trick and Miles who has his own successful project, Miles Nielsen and The Rusted Hearts. Miles’ wife, Kelly Steward is the bands singer.

Kevin Walker had Miles Nielsen from the Nielsen Trust band on the show to talk about the bands show Thursday June 3rd at the Adler Theater in Davenport.  Listen to win tickets all week as we kick off the Buzz’s Big Damn Summer.  Tickets are still available at the Adler Box Office or at Ticketmaster, here