Come explore the lives of children from all different kinds of circumstances through the exhibition, “Where Children Sleep: Photographs by James Mollison,” at the Muscatine Art Center. This revealing series of photographs shares the diverse stories of children in many different countries.

Each studio-style portrait is accompanied by a detailed study of the child’s “bedroom,” which can range from elaborate sanctuaries to the barest spaces set aside for sleep.

The photographs and their related text panels convey the story of childhood including insecurity, hope, pain, comfort, and doubt. Economic inequality, children’s rights, and how we are defined by our possessions and formed by our circumstances are some of the complex social, typological, and cultural issues that resonate in Mollison’s work.

“When I was asked to come up with an idea for engaging with children’s rights, I found myself thinking about my bedroom: how significant it was during my childhood, and how it reflected what I had and who I was,” Mollison said. “It occurred to me that a way to address some of the complex situations and social issues affecting children would be to look at the bedrooms of children in all kinds of different circumstances. From the start, I didn’t want it just to be about ‘needy children’ in the developing world, but rather something more inclusive….”

The project was originally called “Bedrooms”, but Mollison realized that the experience of having a “bedroom” did not apply to many of the children.

“Millions of families around the world sleep together in one room, and millions of children sleep in a space of convenience, rather than a place they can in any sense call their room,” Mollison said. “I came to appreciate just how privileged I am to have had a personal kingdom to sleep in and grow.”

“In selecting this exhibition, we hope children from the Muscatine area will become curious about the lives of children who are growing up in other countries and under much different circumstances,” Alexander said. “The use of bedroom pictures makes it possible to imagine aspects of each child’s daily life.”

One child featured in the exhibition is Prena who lives in Kathmandu, Nepal. The following description is given of her space and story:

Her room is a tiny, cell-like space at the top of the house where she is employed as a domestic worker. Her diet is mainly rice and vegetables. She is fourteen years old and one of thousands of child domestic workers in the country. Prena carries out household chores such as sweeping, cleaning, cooking, and washing. She starts work at five in the morning and finishes at six in the evening. For this, she earns 500 Nepali rupees per month (about US $5.20). She sends the money back to her parents, who have eight other children to support. Prena visits her family twice a year. She goes to school three times a week—which is the main highlight in her life. She admires her teacher, who has made it his mission to educate children like Prena. She would like to be a doctor when she is older.

“I think both children and adults will find the portraits, photographs of bedrooms, and accompanying descriptions fascinating,” Alexander said “I hope the exhibition will encourage people to reflect on the experiences of others and become more curious about our world.”

The exhibition, “Where Children Sleep: Photographs by James Mollison,” will be on view at the Muscatine Art Center from May 26 through August 21, 2022 with free admissio. The exhibition is organized by Curatorial Exhibitions, Pasadena, California.

About James Mollison: James Mollison was born in Kenya in 1973 and grew up in England. After studying Art and Design at Oxford Brookes University, and later film and photography at Newport School of Art and Design, he moved to Italy to work at Benetton’s creative lab, Fabrica. Since August 2011, Mollison has been working as a creative editor on Colors Magazine with Patrick Waterhouse. In 2009, he won the Royal Photographic Society’s Vic Odden Award, for notable achievement in the art of photography by a British photographer aged 35 or under. His work has been widely published throughout the world including The New York Times Magazine, the Guardian magazine, The Paris Review, GQ, New York Magazine, and Le Monde. 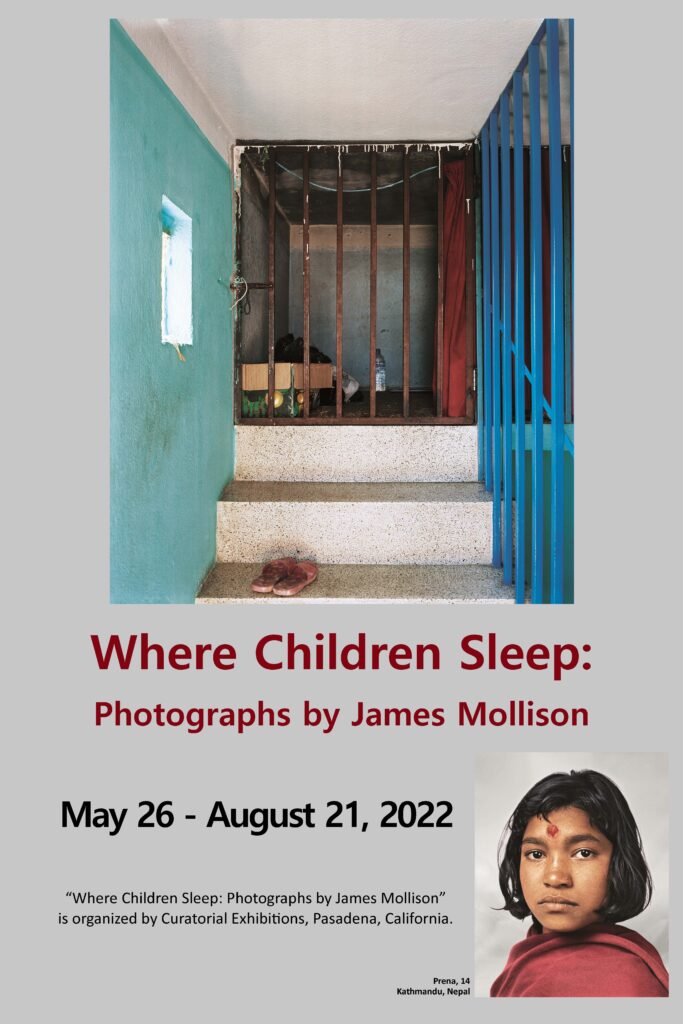