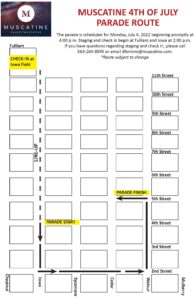 Fourth of July festivities in Downtown Muscatine will mean restricted access to certain streets and changes in traffic patterns throughout the day on Monday, July 4. The weather forecast promises mostly sunny skies with a high temperature of around 90 degrees and that will mean a day filled with family fun in celebration of our Independence Day.

Children, and their caregivers, can dress up as their favorite book character, wear red, white, and blue, or come as you are for this parade through Downtown Muscatine. Those participating are asked to meet in the parking lot at West 2nd and Pine streets prior to the 9 a.m. start. A colorful cast of characters will be on hand to lead the parade down 2nd Street to the Musser Public Library for a book and popsicle.

No traffic restrictions are planned for this parade but those who may be driving through Downtown Muscatine are asked to be alert and aware of the children’s parade between 9 and 10 a.m.

The Greater Muscatine Chamber of Commerce and Industry (GMCC) Community Parade returns for the first time since 2019 with entries marching down Iowa Avenue to 2nd Street to Walnut Street, and finishing on 5th Street starting at 4 p.m. Side-street intersections with Iowa Avenue from Fulliam to 2nd Street will be closed to traffic Monday morning. Staging and check in for the parade will begin at 2 p.m. at Fulliam and Iowa (Iowa Field).

Iowa Avenue will again be open between 3rd and 4th streets but those watching the parade are asked not to congregate in this area as the west half of the block will still be blocked off due to construction at the new Stanley Center for Peace and Security (old library building).

Side-street intersections will reopen once the parade participants and citizens watching the parade have dispersed.

The downriver boat launch inside Riverside Park will be closed to the public Sunday and Monday (July 3-4). Parking will also be restricted in the downriver end of Riverside Park with Almost Fireworks Fest from 5-8 p.m., the presentation by the Honor Guard and a performance by the Muscatine Symphony Orchestra in front of Pearl City Station at 8 p.m., and then Fireworks Over the Mighty Mississippi at dusk.

The traffic pattern for those exiting Riverside Park following the fireworks display will be: 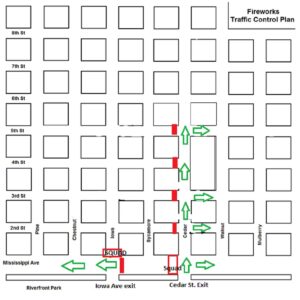