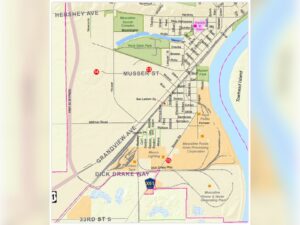 The City of Muscatine has announced the establishment of the Grandview Neighborhood Grant Program. The goal of the program is to promote neighborhood activities and other projects that build on community pride and connection in the south end of Muscatine.

The program will be the subject of two neighborhood meetings with the first scheduled for 6 p.m. Wednesday in the Community Room at the Musser Public Library and HNI Community Center.

The second neighborhood meeting will be at 6 p.m. on August 17 at the Musserville United Methodist Church, 1001 Oregon Street, Muscatine. City of Muscatine staff and members of the committee overseeing the program will also be available to answer questions from 8 a.m. to 12 p.m. Saturday (Aug. 13) at the Muscatine Area Farmers Market in the 3rd Street parking lot, and from 5-7 p.m. on August 16 at the Muscatine Southend Farmers Market in the Dollar General parking lot (807 Grandview).

“The Grandview Neighborhood Grant Program will be funded from $50,000 in ARPA (American Rescue Plan Act) funds that were allocated by the City Council during the budget process for neighborhood revitalization in the Grandview Corridor,” Jodi Royal-Goodwin, Community Development Director for the City of Muscatine, said.

The Grandview Neighborhood Grant Program would encompass neighborhoods from Hershey Avenue to the Mississippi River and from Carver Corner to the U.S. Hwy 61 Bypass.

A total of $10,000 will be earmarked for Tier I Mini Grants with individuals being able to apply for up to $1,000 for projects such as neighborhood cleanups, community gardens, community spaces (e.g., benches, gardens, etc.), neighborhood events (e.g., picnics, outdoor movie nights, ice cream socials, neighborhood tool library or food pantry, or other similar projects that would instill sense of community.

Applications for the Tier I Mini Grants will be accepted from September 1 through October 31. Grants will be awarded on a first come, first served basis, and projects should be completed within 90 days of the award. More details on the application process can be found at Neighborhood Grants.

A total of $40,000 will be awarded in Tier II property improvement grants. Applicants may apply for up to $10,000 but there is a 50 percent match requirement for the grant award. These improvements must include at least four properties, must be on the properties exterior, and visible from the street (e.g., facades, roofs, landscaping, windows, front entry doors, sidewalks, steps, retaining walls, etc.).

Applications for the Tier II Property Improvement Grants will be accepted February 1 to April 30, 2023. Grants will be awarded based on a defined scoring criteria.  More details on the application process can be found at Neighborhood Grants.

As part of the Residential Support Pillar, the City of Muscatine conducted neighborhood outreach meetings utilizing the Muscatine Heart and Soul engagement model. This model focuses on identifying what residents appreciate about living in Muscatine, what they like about living in their neighborhood, and what opportunities exist to strengthen those connections.

A key theme that emerged in these community discussions was that residents would like to feel more connected to their neighbors and to feel more engaged with their community. In addition, the 2022 Muscatine Community Survey Results support neighborhood initiatives as a priority.

While 72 percent of survey respondents stated they would like to feel more connected and engaged with their community, only 33 percent responded that the quality of those connections were excellent or good. The gap between importance and quality suggests that an initiative supporting neighborhood connections will be a good investment of ARPA funds.