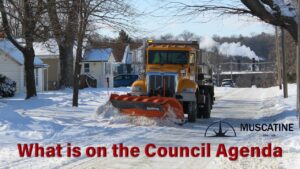 Revisions to the current City of Muscatine Snow Emergency Regulations will be the subject of a Public Hearing during Thursday’s (Aug. 18) City Council meeting.

A virtual meeting will be held in conjunction with the in-person meeting for those who want to view the proceedings or make a comment but do not feel comfortable in attending in person. Details for joining that meeting are listed below.

During its December 21, 2021, in-depth session the City Council agreed to move forward with updating City Code to allow for a snow emergency ordinance that would prohibit parking on posted snow routes. The potential revisions to the ordinance were presented to City Council at the July 15,2022, in-depth meeting with the Council agreeing to proceed with the revisions.

The Snow Emergency Regulations were changed in 2013 from essentially posted snow routes that would become no parking areas when a snow emergency was declared so that plows could more easily remove snow from the street. The change implemented the alternative side of the street parking policy with the thought that it would result in more vehicles being moved off the street to allow for more efficient snow removal of the streets to the curb lines.

The alternate side parking provision in the current ordinance has proven to be difficult to enforce and difficult for the public to understand and comply with. The proposed revisions to the ordinance would bring back the posted snow emergency routes where parking would be prohibited during snow removal. In addition, the revised ordinance clarifies when a snow emergency would be declared along with added sections on stalled vehicles, removal and impounding of vehicles, and citation on vehicles.

In other business Thursday, the Council is expected to:

Information on the presentations and other agenda items can be found by clicking AGENDA to download a PDF version of the City Council agenda and/or attachments.

Thursday’s City Council meeting is open to the public. Citizens who do not want to attend the in-person meeting can watch and/or participate through the GoToMeeting virtual meeting portal. Information on joining the session and how to make a comment during the meeting is listed below. The session will also be broadcast live on the City of Muscatine YouTube channel and on Muscatine Power & Water Cable Channel 2.

To view or participate virtually, click on the link below or call in to the GoToMeeting. Be sure to mute your computer, laptop, tablet or smartphone (press *6 when using phone or mute button on computer). At the appropriate time, you will be able to unmute your device to ask a question or make a comment. The public can also use the “chat” feature on GoToMeeting to pose a question to the Mayor, Council, or staff member. Those wishing to speak should use the chat box to post a message that will be seen by the mayor who will address the questions or call on the speaker in turn. Those using their phones must wait until the mayor asks for additional comments. The mayor will recognize you prior to you addressing the Council.

Join the meeting from your computer, laptop, tablet or smartphone by clicking the following link: https://www.gotomeet.me/CityofMuscatine/city-council-meeting

The link, phone number, and access code are the same for both meetings. You can remain logged on between meetings or exit and re-enter at the appropriate time.

New to GoToMeeting? Get the app now and be ready when your first meeting starts: https://global.gotomeeting.com/install/970499597