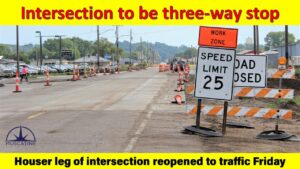 Heuer Construction plans on continuing work on sidewalks and driveways from Franklin Street south toward Houser. The Sampson leg of the Grandview Avenue intersection is expected to be completed in mid- to late-September after all underground work is completed.

Drivers are reminded that there is a 25 mph speed limit and fines are doubled in the construction zone. Please be alert for construction workers and pay attention to traffic control devices.

Underground work on Climer from High to Logan will resume once work on Logan between Lucas and Climer has been completed. Advance notification will be given when this section of Climer is closed to traffic.

Lucas Street remains closed to traffic from Busch to West 8th as the contractor prepares this section of Lucas for repaving, which is scheduled for the week of August 22 depending on the weather.

There will be limited access available with this section of Lucas reduced to one lane where the underground work is being completed. A temporary driving surface will be provided behind the underground work once the contractor determines it is safe to do so. Driveways along the work area will be inaccessible while the sewer is being installed, but the contractor will attempt to restore driveway access as quickly as possible with a temporary driving surface.