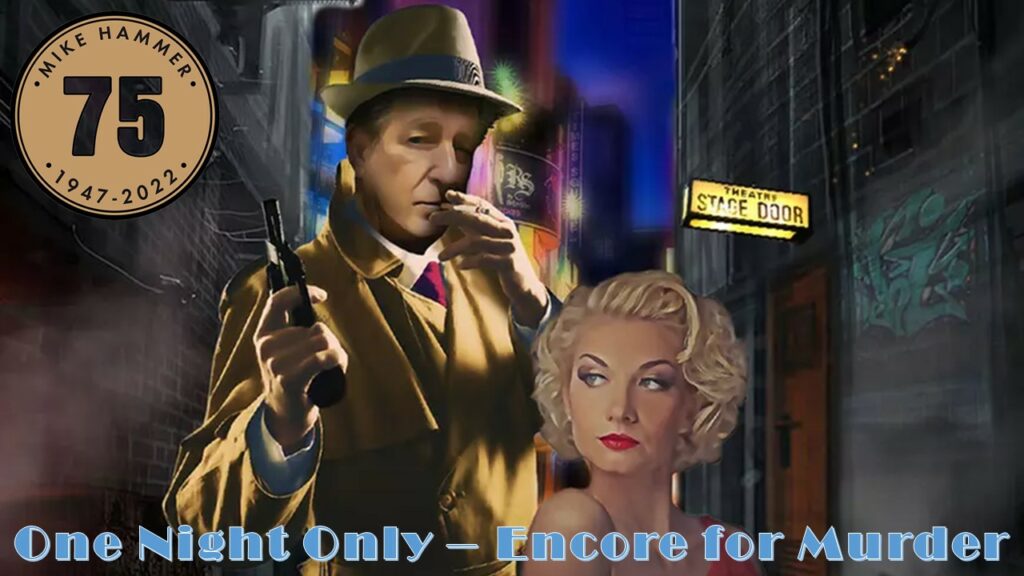 The Friends of the Muscatine Art Center will be offering a special performance of Encore for Murder that will feature a cast of local talent performing alongside Gary Sandy of WKRP in Cincinnati fame. The one-night-only performance will be held at 7 p.m. on September 17 in the Muscatine High School Auditorium.

Written by Max Allan Collins, Encore for Murder follows private eye Mike Hammer, a character originally created by Mickey Spillane and further developed by Collins. Presented in a radio show format, an actress attempting a return to Broadway receives a death threat, and Mike Hammer, played by Sandy, is on the case. The situation is complicated as the actress is recently widowed and is a former love interest of Hammer’s.

The production is a special tribute to celebrate the 75th anniversary of the publication of the first Mickey Spillane novel, I, the Jury, in 1947. Muscatine-native Collins was a childhood fan of mystery writer Mickey Spillane, and the two later became friends and collaborated on a comic book series in the 1990s called Mike Danger. Upon Spillane’s death in 2006, Collins developed the unfinished Hammer drafts, including a single page written by Spillane with the plot for this production, Encore for Murder.

In addition to authoring the radio play, Collins is Co-Director and has been actively involved in the production.

“The 75th anniversary of this iconic character will be honored a number of ways,” Collins said.  “A new Mike Hammer novel, Kill Me If You Can, will be out about a week after our production, and a biography I’ve written with James Traylor, Spillane — King of Pulp Fiction, will be out early next year. My 1999 documentary Mike Hammer’s Mickey Spillane is being expanded for Blu-ray release and the streaming services.

“I’m thrilled to bring Encore to Murder to Muscatine as part of that celebration, with Gary Sandy as Mike Hammer,” Collins said. “Gary was Patty McCormack’s co-star in Mommy’s Day, the indie film we shot here in 1996.”

This is not the first time Encore for Murder has been staged. It was first presented in 2010 at the International Mystery Writers Festival in Owensboro, Kentucky. Then, in 2018, Encore for Murder was presented at the Murray Theatre in Clearwater, Florida. In both instances, Gary Sandy played the lead role of Mike Hammer.

“The pieces really fell into place once Max arranged for Gary Sandy to take the stage in Muscatine,” said Co-Director Karen Cooney. “Having performed and directed for local theater for decades, I knew our actors could rise to the occasion. It has been a truly memorable experience to work with Max and Gary.”

The project began as a modest radio show production. When Cooney learned that Collins had written a script that had already been performed, the chance to spotlight the Muscatine author and his role in continuing the Mike Hammer store was too fantastic to pass up.

To accommodate a larger audience, Encore for Murder will be staged at the Muscatine High School Auditorium. 2705 Cedar Street, Muscatine. General admission tickets are $15. Premium seating with admission to the After Party at the Merrill Hotel is $50.

At the After Party, guests will enjoy a question-and-answer session with Collins and Sandy, photo opportunities, autographs, and a selection of desserts and beverages. Proceeds from the performance and After Party will benefit Friends of the Muscatine Art Center. Tickets can be purchased at macfriends.booktix.com and information is posted at muscatineartcenter.org.

The Merrill Hotel is offering a discount for the evening of September 17 to those who are attending Encore for Murder. A reservation link to the Merrill is posted on the event page on the Muscatine Art Center’s website.