Imagine falling down into one of the many ravines that dot the Muscatine landscape, or being trapped inside a home filled with smoke. These were two scenarios used by the Muscatine Fire Department for training exercises this past week.

“You can do a lot of training at the station but there is nothing like getting out and experiencing the training in the real world,” Muscatine Fire Captain Joe Timmsen said. 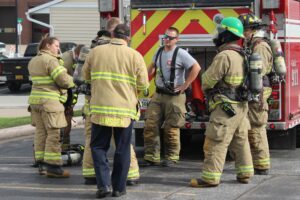 Timmsen recalled a tragic accident many years ago when a woman went off the Cedar Street pavement near Discovery Park, down an embankment, and drowned. The recollection inspired Timmsen to create a scenario where the firefighters would have to climb down into a ravine and rescue a victim.

“Getting out and performing these exercises among the dirt, trees, mud and other weather conditions (like snow and ice) better prepare our firefighters to perform this kind of rescue when called on,” Timmsen said.

The Cedar Street fatality also inspired two former firefighters, Mike Collins and Chris Brace, to develop a “z-rig” for low angle rescues. Timmsen noted that the department still uses the rig when training for or performing low angle rescues in which a rope may be required, but serves as a belay and not to haul the rescuers and victim up a slope.

Muscatine firefighters used the ravine off of Nyenhuis Street to conduct the most recent exercise.

“We have new people on the shifts who need to be trained in rope rescues,” Timmsen said. “We have done rope training recently for HIRT (Hazardous Incident Response Team) and are now taking that training to members of each shift.”

Muscatine Firefighters also continued training in a vacant home on Cedar Street.  Battalion Chief Darrell Janssen said that training conducted Monday included working with ladders and utilizing the VentEnterSearch (VES) technique to find a potential victim on the second floor of the residence.

“In the scenario we trained with today, a firefighter would go up a ladder followed by a second firefighter, and use this (VES) technique to break (vent) the window, enter through the window, and do a quick search for a potential victim.”

If found the victim would be extricated through the window and brought down the ladder with the assistance of the second firefighter.

Firefighters were also instructed in the proper placement and use of ladders when attacking a fire. 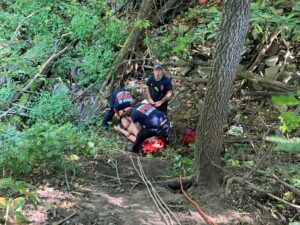 Janssen said that training will continue for all shifts at the Cedar Street house including live small fire drills.

“We really cannot burn the house down because of the Muscatine Power and Water pole and electrical lines that are too close to the house,” Janssen said. “We will still be able to do some small burns to give our firefighters additional training.”

The house is scheduled to be demolished later this year.

So far this month the Muscatine Fire Department has trained for high angle rescues at the MPW water tower and conducted an earlier training session at the Cedar Street house. In that scenario, a fire was reported on the second floor but a “victim” was discovered on the main floor who had to be rescued before the fire could be attacked. An additional scenario was added with a firefighter being injured while attacking the fire necessitating the implementation of Rapid Intervention Protocol to remove the firefighter from the residence.