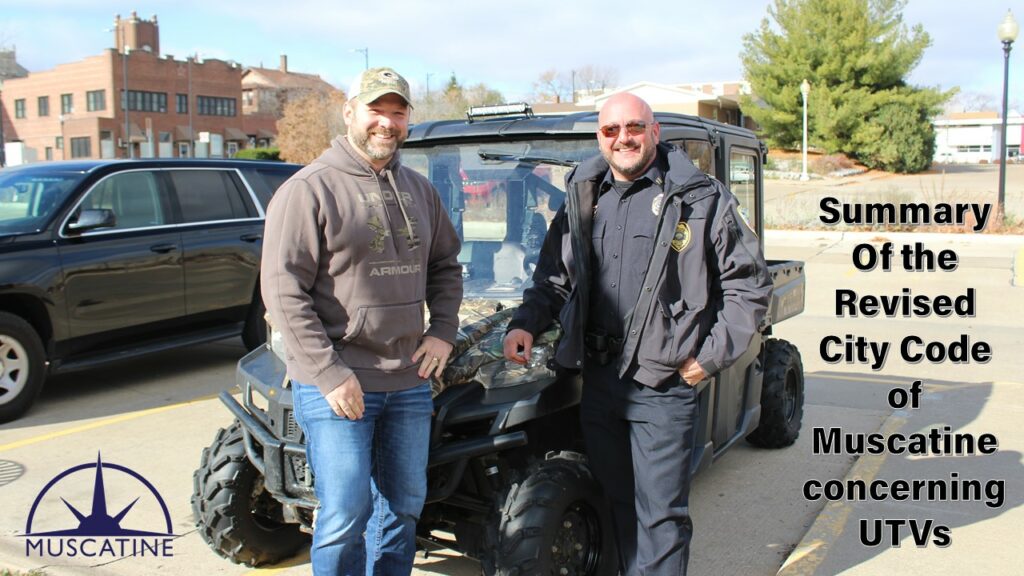 An amendment to Title 7, Chapter 2 of Muscatine City Code was approved by the Muscatine City Council and is now on the books, allowing Off-Road/Utility Terrain Vehicles (UTVs) to be used on city streets and alleys with certain stipulations.

A UTV is defined as a motorized vehicle with not less than four and not more than eight non-highway tires or rubberized tracks that has a seat that is of bucket or bench design, not intended to be straddled by the operator, and a steering wheel or control levers for control.

UTVs are allowed on city streets with the exception of Highway 61, Park Avenue, and Dick Drake Highway, but they make a direct crossing of these streets or highways provided that the angle of crossing is approximately 90 degrees to the direction of the street or highway, and at a place where no obstruction prevents a quick and safe crossing.

An ATV is defined as a motorized vehicle with not less than three and not more than six non-highway tires that is limited in engine displacement to less than 1,000 cubic centimeters and in total dry weight to less than 1,200 pounds, and that has a seat or saddle designed to be straddled by the operator and handlebars for steering control.

ATVs are not allowed on city streets with the exception of use in snow removal operations.

A video presentation concerning the use of UTVs is available on the City of Muscatine YouTube page at UTVs on Muscatine Streets.

You can also review the revised City Code by reviewing Title 7, Chapter 2 (Traffic Regulations in General)