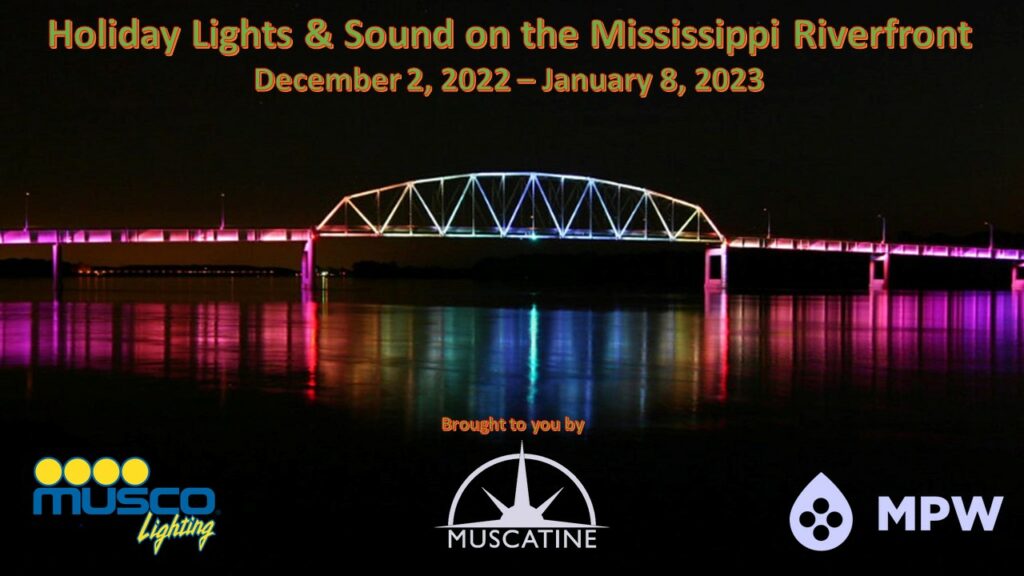 Downtown Muscatine is the place to be this weekend with a variety of activities to kick off the holiday season including the Parks & Recreation Candy Cane Hunt, Jingle & Mingle sponsored by Discover Muscatine, and a visit by the Canadian Pacific Holiday Train.

Not least among these events is the Friday premier of a featured event that quickly became a holiday classic and a must see for Muscatine residents and visitors. Muso Lighting has again partnered with Muscatine Power & Water (MPW) and the City of Muscatine to bring a musical light show featuring Muscatine’s Norbert F. Beckey Bridge.

The final touches are currently being made to the design of this year’s show that will include an introduction, eight songs including several new songs, and a running time of 13 minutes. Last year’s production had a running time of eight minutes and proved to be a huge success.

The 2022 version will premiere at 7 p.m. on Friday, December 2, with residents able to tune into 87.9 FM to listen to the special holiday music while watching the light show from the warmth and convenience of their vehicles while parked in Riverside Park. The program will run every day from 5:00 p.m. to 12 a.m. through January 8, 2023.

The premier follows the annual Christmas tree lighting ceremony that will be held from 5:30-5:45 p.m. at MidwestOne Bank at the corner of Cedar and 2nd Street. Jingle & Mingle (formerly Holiday Stroll) will be held from 5:30-8:00 p.m. along 2nd Street from Mulberry to Pine, and is expected to bring thousands to Downtown Muscatine Friday night. Visit https://pearlcityjingleandmingle.com/ for a complete list of activities.

The Muscatine Parks and Recreation Candy Cane Hunt will be held at 6 p.m. near Pearl City Station located in Riverside Park. Hunters and spectators will gather outside of the Pearl City Station with two age-group areas (pre-kindergarten through first grade and second through fourth grade girls and boys) set up for the hunt in the green space near the basketball courts.

Children will be able to sweep through the designated areas gathering up the sweet treats that they will be able to keep. The young hunters will receive a prize for each candy cane found. “Special” candy canes will be sprinkled around that can be redeemed at Pearl City Station for a special toy.

The Candy Cane Hunt will be held in the dark, so bring a flashlight if you wish. LED flashlights will be available from our sponsors if you do not have one.

Please contact the Muscatine Parks and Recreation Department at (563) 263-0241 for more information.

Riverside Park will also be the place to be Saturday night as the Canadian Pacific Holiday Train makes its first stop in Muscatine after an absence of several years due to the pandemic. The train is anticipated to arrive at 7:30 p.m. Saturday with a 20-minute program from the boxcar stage that will be opposite the downriver boat ramp.

The Iowa Avenue railroad crossing will be closed to traffic during the train’s arrival and the performance but the Cedar Street entrance will remain open.

Christmas with the Symphony

For those looking for musical entertainment in, perhaps, a warmer location, the Muscatine Symphony Orchestra will present “Christmas with the Symphony” at 7 p.m. Saturday (Dec. 3) at the First Presbyterian Church, 401 Iowa Avenue, Muscatine. Admission is free but those attending are asked to bring a toy or a canned good donation to the performance. Free books for children will be provided by the Muscatine Literacy Coalition. For more information visit www.muscatinesymphony.org.