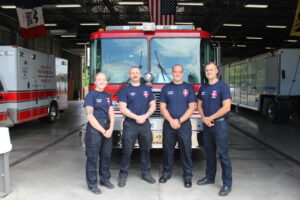 “We’re excited to hire and train these four new firefighters,” Ewers said. “The fire service is physically demanding and mentally tough, but it is one of the most rewarding careers out there where you are making a difference and saving lives. It doesn’t get any better than that.”

Ewers added that he is looking forward to seeing these new hires acquire the skills of being a firefighter.

“I look forward to seeing these new hires go through the academy, training exercises, learn new skills, grow, build confidence, and serve our community with pride as a Muscatine firefighter,” Ewers said.

a new career path but it is also exciting for us as well,” McSorley said. “We get the opportunity to lay the foundation blocks for these recruits as they start their journey.”

“It’s fun to see their faces day one and then again on the last day when we live burn,” McSorley said. “This (live burn) is where the things we have done over the past month all come together. It can be a grueling four weeks as we test them mentally and physically. But as every day passes you see them getting faster and the confidence in their eyes is growing.”

McSorley noted that the best part of his job is being involved with the academies.

“We have come a long way over the past years trying to build this month to be perfect and make sure they get exactly what they need to head to shift and be successful,” McSorley said. “This is a really fun group and I am excited for them, and excited to see where each one of them takes their career.”

Janssen is an Emergency Medical Technician (EMT) and has been a combat medic in the Iowa Army National Guard for the past eight years and is moving to the Muscatine area.

“I was looking to pursue a job that would further my career on the civilian side,” Janssen said. “The fire department was just that job.”

Duncan is also EMT certified and a Navy veteran, working as a heavy equipment operator in the Navy Seabees along with being a hospital corpsman and a fire controlman.

“Muscatine is the town I grew up in and I spent time with the MFD as part of the EMT course,” Duncan said on why he applied to work for the Muscatine Fire Department.

Whitehall decided to take EMT classes once he left the Army and his interest kept growing through that journey.

“I talked to a couple of people and they talked very highly about this department and the people that work here,” Whitehall said.

Whitehall has a bachelor degree from Western Illinois University and is a U.S. Army veteran.

Meredith is another recruit that has had previous experience with the Muscatine Fire Department during his ride-a-longs as part of the EMT classwork through Scott Community College.

“The Muscatine Fire Department is a progressive department that will allow me to reach my goals in my career,” Meredith said.

Meredith and his wife, Kaitlin, live in Blue Grass.