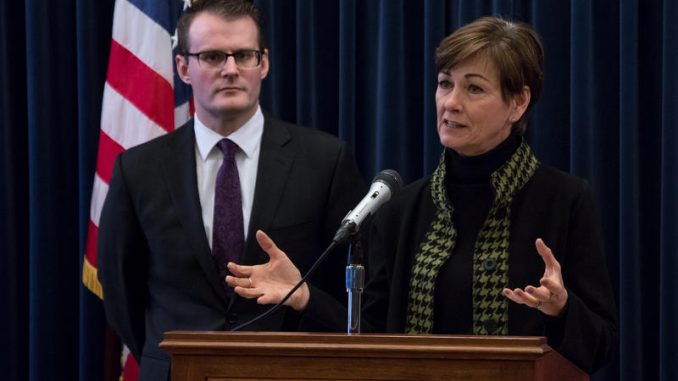 Gov. Kim Reynolds holds a semi-regular press conference during the 2019 legislative session. She speaks in support of a constitutional amendment restoring voting rights for felons and better accessibility to oral contraceptives. 2/27/2019 Photo by John Pemble/Radio Iowa

Governor Kim Reynolds today said some people are misinterpreting the lack of a statewide shelter-in-place order as a sign there are no restrictions in place in Iowa.

Dr. Anthomy Fauci, one of President Trump’s medical advisers, last night on CNN said he doesn’t understand why every state hasn’t issued one. “Maybe he doesn’t have all of the information,” Reynolds said this afternoon during her daily news conference. “…You can’t just look at a map and assume that no action has been taken. That is completely false.”

Iowa is one of five states where there’s no statewide or regional stay-at-home or shelter-in-place order. Reynolds said she has taken “significant and incremental steps” to mitigate the impact of COVID-19 by closing schools and businesses and ordering people not to gather in groups of 10 or more.

“Iowans of all walks of life are either strongly in favor or strongly opposed to shelter-in-place,” Reynolds said, “and this has become a divisive issue at a time when we must be united in this response to this crisis.”

On March 15th, Reynolds recommended that Iowa schools close for four weeks. Yesterday, she ordered schools to remain closed for the entire month of April. On the 17th of March, she ordered bars and restaurants to close. Over the following weeks the governor added a variety of retail businesses — from hair salons and barbershops to gyms and furniture stores — to the closure list.

“So if you did a side-by-side comparison of what we are doing in Iowa and what other states are doing, they are much the same,” Reynolds said. “Even those states that have implemented shelter-in-place orders have kept the majority of businesses open, similar to our orders.”

Reynolds said this afternoon she’s determined between 80 and 81 percent of Iowa businesses would be considered “essential” and allowed to continue operating under a shelter-in-place order. The governor told reporters she has not yet read a letter from the Iowa Board of Medicine, urging her to issue a statewide shelter-in-place order.

State officials announced earlier today testing has confirmed 699 cases of COVID-19 in Iowa. Eleven Iowans have died of the virus and 80 are hospitalized for treatment.