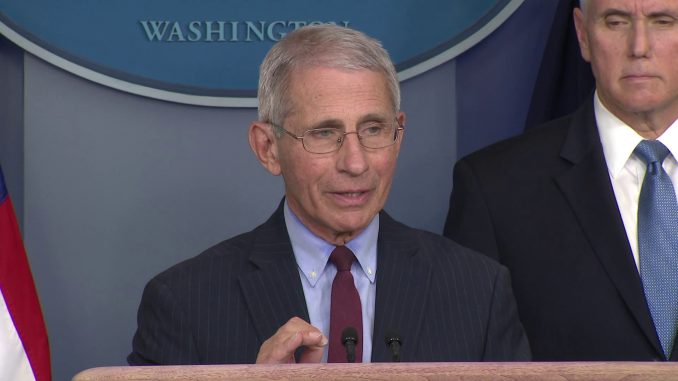 One of President Trump’s top public health advisers spoke with the governors of Iowa and Nebraska Monday.

Dr. Anthony Fauci said late last week that he did not know why all states’ governors weren’t issuing shelter-in-place orders.

“When I had mentioned that, I think there was a public response that they weren’t really doing anything at all,” Fauci said Monday evening, “and they really are doing a very good job — both of them.”

Fauci made his comments during the president’s news conference at the White House. Reynolds had earlier in the afternoon tweeted about her conversation with Fauci, saying the doctor told her and Nebraska’s governor they are on the same page with federal guidelines.

Fauci offered this analysis of Iowa and Nebraska’s COVID-19 closures: “Just because they don’t have a very strict stay-at-home order, they have in place a lot of things that are totally compatible with what everyone else is doing.”

Reynolds described Fauci as “100 percent supportive” of the proclamations, orders, and decisions she’s made thus far in the pandemic. The Reynolds Administration is using a rating system to chart the severity of the COVID-19 outbreak in each of six regions of the state.

By mid-Monday, it showed a large section of southeast Iowa was within one point of reaching the level at which Reynolds would order at least a regional shelter-in-place order.