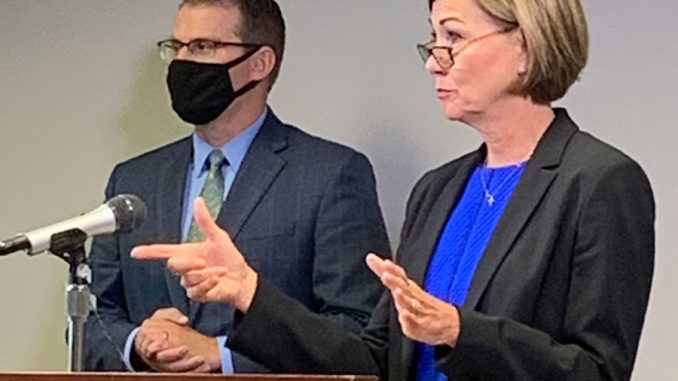 Governor Kim Reynolds today said she has not given Iowa cities and counties authority to enforce local ordinances that require people to wear face coverings in public.

Reynolds said that means the proclamation Muscatine’s mayor issued Sunday requiring face coverings is “not appropriate,” but the governor said if conditions change dramatically, she may adjust her public health proclamation.

“All things are on the table and we’re going to continue to review, manage, mitigate and contain the coronavirus,” Reynolds said during a news conference late this morning. “We can do that in a responsible way.”

“Enforcement is the issue and we are working on that, nevertheless; it’s the right thing to do,” she said in a Facebook post. “Some say this is political, but I can assure you, for me it absolutely is not. It is me doing my job as your Mayor.”

Regarding the Governor’s statements this morning about the proclamation, it stands as written. Enforcement is the issue…

The governor said she will “elevate” the message about the importance of wearing a mask to protect others.

“This is the same information that we’ve given to Iowans from the very beginning,” Reynolds said. “People need to practice personal responsibility.”

In the past two weeks, from June 21st to July 5th, 60 percent of the Iowans who’ve tested positive for COVID-19 were adults between the ages of 18 and 40.

“People have been locked down. You know, they’re ready to get outside. They’re ready to get together with friends and family, so I don’t think it’s entirely surprising that we’ve seen a little bit of an uptick,” Reynolds said. “So now, we need to dig into the details. We need to figure out why and then we need to talk about…the next steps that we can do to continue to protect Iowans.”

The governor noted the worrisome increase in cases among young adults in Iowa’s college towns and larger cities. Reynolds said she would consider adjusting regulations on bars, perhaps ordering an earlier closing time, if that trend continues.

“There’s a perception that because COVID is less serious for younger adults, that an increase in positive cases among this age group isn’t an issue, but that perception is false,” Reynolds said. “The consequences of COVID-19 continuing to spread among young adults increasing the likely the virus will continue to spread…to others, including those that are most vulnerable.”

Reynolds said for the past two weeks, the Test Iowa program has far surpassed its targeted capacity of 3000 tests per day. From Monday through Thursday of last week, more than 13,600 Iowans were tested through the program. A new Test Iowa site will open tomorrow in Algona. An estimated 10,000 motorcyclists from around the state gathered just outside Algona last weekend, raising concerns the virus would be spread in the community.